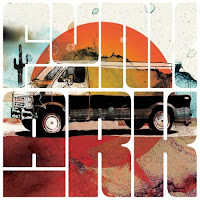 I went to the music fair,
The Funk Ark from DC were there.
Mr. Will Rast, the head of the cast
Played keyboards with spice and flare.

Apologies to the Animal Fair, but the energy and rhythm of this great sophomore album from The Funk Ark just seemed to fit its meter somehow. Says Rast:

Funk seems simple, but it takes an almost spiritual dedication to the music to play it well. When we’re playing at our best, the music becomes greater than the sum of its parts. What we do requires each player to contribute a small, but integral, part of the whole; when we all lock into the groove, it becomes a sort of meditation.

For listeners, we're not talking a Buddhist-silent-retreat-in-the-serene-mountains kind of meditation, but a Gnawa-style-dancing-and-sweating-and-eyes-rolling-back-in-your-head kind of ecstatic groove, with musical foundations in R&B, Afrobeat, Latin, and other influences. Check them out.

Email ThisBlogThis!Share to TwitterShare to FacebookShare to Pinterest
Labels: funk, the funk ark