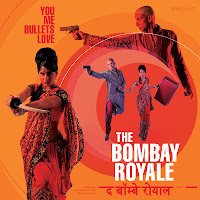 Now that I've heard the Australian band Bombay Royale, it seems so obvious. Why wouldn't it? Heaps of old Bollywood recordings seem to be floating to the surface of the global-music ocean (think A.R. Rahman collections, or Bollywood Bloodbath). And everyone from Singapore's Dick Lee to Benin's Angelique Kidjo has jumped on the Bollywood bandwagon at some point. So why not a new band playing this old music?

Bombay Royale is for lovers of Bollywood films and the old scratchy recordings by Mohd. and Lata and Asha and the like. Only without the scratchy. Vocalists Parvyn Kaur Singh (“The Mysterious Lady”) and Shourov Bhattacharya ("The Tiger") give authentic voice to the songs, with retro-sounding duets such as the title track "You Me Bullets Love." Meanwhile, the music swerves from horn-driven, organ-saturated tunes that wouldn't sound out of place from Dengue Fever ("Monkey Fight Snake") to driving surf-rock ("Jaan Pehechan Ho").

There's tabla here, but you're not going to mistake this for traditional Indian music. Bollywood has always had its own musical language, borrowing heavily from the pop music of the West. Today that means funk and hip-hop mixed in with bhangra, but there's something particularly charming and excessively fun  about Bombay Royale's take on the Bollywood of the 1960s and 70s.

from the album You Me Bullets Love