Are CD compilations just official mixtapes? Or are they great starting points for introductions to new artists/genres? Or are they little more than attempts by greedy record labels to squeeze out more profits by cherry-picking the best songs from otherwise mediocre albums?

I'm thinking about compilations because of a new set I recently received of African music. More on those in a moment. First, a bit of my own history with compilations.

I'll admit that I've met a lot of great musicians through compilations. Two albums that stand out in memory are Shanachie's 1990 album of South African jive The Indestructible Beat of Soweto, and the 1992 Cuban compilation Cuba Classics 2: Dancing With the Enemy. Repeated listenings burned the songs -- by the likes of Amaswazi Emvelo, Conjunto Rumbavana, Nelcy Sedibe, and Celeste Mendoza -- into my brain, where they reside still.

Later I found discovery in many of the early Putumayo World Music compilations, and perhaps even more in the Rough Guides -- both of these series include enough information about the artists to get one started in further explorations. And the annual collections assembled by the late BBC icon Charlie Gillett were always great for a few new discoveries. (Charlie, we miss you!)

For every memorable compilation, however, there seems to be an evil twin, a CD thrown together with little thought, mixing styles, countries, or artists in a haphazard way that's far from memorable. Even Putumayo seems to fall into this rut now and then (I challenge you to give a definitive definition of the distinctions between their "Groove," "Beat," and "Lounge" series). The rest of you…you know who you are.

And then there are the geographically challenged albums I recently received from Lusafrica: African Voices, African Guitars, and African Rhythms. Oh, where to start! Trying to represent any aspect of "African" music on a single CD is asking for trouble. 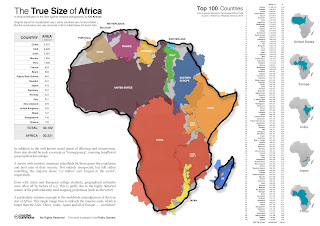 More than a billion people. More than a thousand languages. At least 54 different countries. All in an area so big…well, see the graphic.

So this trio of CDs is definitely out looking for trouble. African Voices has 16 tracks, I see, and they seem heavily weighted towards Cape Verde (Teofilo Chantre, Cesaria Evora, Boy Ge Mendes) with nods toward Guinea (Sia Tolno), Zimbabwe (Chiwoniso), South Africa (Mahotella Queens), North Africa (Malouma, Hasna El Becharia), Congo (Wendo Kolosoy), and Madagascar (Rajery). But some of the most powerful voices and styles are missing: Senegalese mbalax, Ethiopian jazz/funk, Egyptian wedding music, Nigerian Afrobeat…. Yes, it would be difficult to include all of these on a single CD, but Lusafrica decided the breadth of the categories, not me.

The other CDs also have both strengths and omissions (no Louis Mhlanga on African Guitars? Please!). Also curious is the repetition: The Mahotella Queens and Angola's Bonga appear on all three CDs, and several artists make double appearances. But given the restriction of a mere 48 tracks, is this repetition really the best approach? Could you really not decide whether African Guitars or African Rhythms was the best fit for Cameroon's Sally Nyolo (for that matter, why not, instead, African Voices, seeing as she's primarily a singer)? 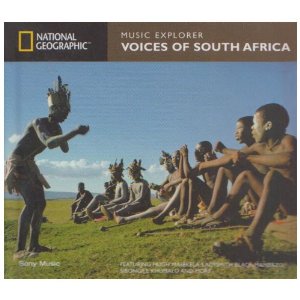 Okay, rant done. And I don't mean to pick on Lusafrica too much, since they're a wonderful label with usually stellar offerings. But these three albums --while they may provide great entry points to a broad swath of music for the African music newbie -- are surprisingly lacking in focus (and in useful liner notes). Listeners deserve better work on the collection, even if the individual songs and artists are great.

Don't give up on compilations; but look closely at the details, since quality will vary -- even from a normally high-quality label.

from Voices of South Africa.