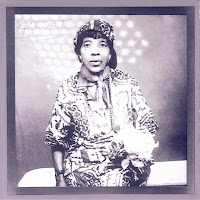 I'm thinking about bugs today. Well, still thinking about them. If you caught last week's episode of Spin The Globe, you'll understand why. And if you didn't catch it, then you missed this, um, gem from a certain Liberian Congress-Woman.

I'm sure I've written about Malinda Parker before, but it's worth mentioning her again for those who may be new to SoundRoots. Or those who just want something different -- very different -- to grace their earbones this week.

Others have compared Parker to Tom Lehrer and Nina Simone; I'd put her in close company with Joseph Spence as well. She pounds on the piano with no small skill, and sings a coherent melody, but it's all teetering on the edge of madness in a most fascinating way.

The generous listener may find her eccentric; others may think she's just nuts. But she's certainly entertaining. This 5-song album includes a longer(!) version of this anti-mosquito public service announcement, in which she creates several new ways to pronounce Rachmaninov while playing something based loosely on his music. This shorter version has more of a tipsy-ragtime-calypso feel, and she manages to say the word "cousin" more than 200 times (someone else did the counting, not I).

from the album Tubman Goodtype Songs of Liberia

If you need more Parker, check out the compilation Songs of the African Coast: Cafe Music of Liberia, which is where I first heard her, performing several songs with the slightly more subdued piano work of Prof. Howard B. Hayes.


Parker indeed was, by the way, a member of Liberia's House of Representatives during the administration of President William V. S. Tubman.

I'll send the link to your post to some friends of mine who are working on malaria prevention in Sierra Leone, they're surely going to like it.

This song reminds me a bit of Seun Kuti's Mosquito Song. Also a very funny way to raise awareness about malaria.

I know, LeRoc -- she does draw out the suspense, even as she keeps repeating the message. That Seun Kuti song did make it into my bug-themed show, the playlist for which you can find here