Okay, so I didn't make it up to HonkFest West last weekend. I know, I know... but I did get to a great African show with three acts and a Sounders game, and got to spend quality time with my sweetie. And I'm not at all reluctant to say that the sweetie trumps even the most electrifying festival. (Though often I get both her and the music -- best of both worlds!) 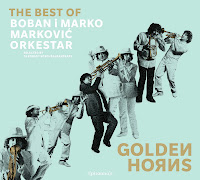 So... I have a horn-shaped hole in my heart this week. Fortunately, the new album from Markovic and son is just the thing to fill it. Not new material, this CD called Golden Horns, but something of a greatest hits things, with material drawn from Devla, Go Marko Go, Boban i Marko, and various other albums and remixes (Frank London, Robert "BalkanBeats" Soko, and Dunklebunt have their fingers in this pie).

Informative liner notes accompany the music. The biography of Boban Markovic tells how easily distracted he was as a child, straying from the family tradition of musical performance (passed down from his father and both grandfathers). Aspiring musicians who've been told by their parents that they should choose a more practical career path may be amused by the story about how Dragutin Markovic had to sit down with 10-year-old son Boban and lay down the law. His destiny, dad insisted, was the trumpet.

We can all be thankful for that talk, thought Boban never had to have a similar talk his own self-motivated son Marko, who taught himself his father's songs, joined the touring band at 14, and was given creative control of it on his 18th birthday. Today, this family has sprung some of the most delicious Balkan brass music to grace my earballs, from the swing of "Rromano Bijav" to their speed-brass version of "Hava Naguila." If you don't have their other albums, this is a fantastic place to start. If you do have the rest of the discography, well, you should still get this.

Here's one you can dance to.

from the album Golden Horns