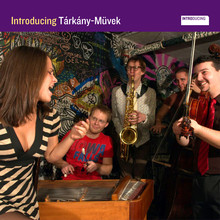 Tárkány Művek (Tárkány Works) is a group of young musicians from Budapest, Hungary who, according to their website, "weld the raw energy of traditional Hungarian folk, the intellectual rigour of classical music, and the spiritual depth of avant garde jazz and poetry."

Not knowing the language, it's hard to tell about the poetry and spiritual depth, but there's certainly something of jazz here, particularly in the sax solos of Gergő Kováts.

"What we would like to achieve," says band leader Bálint Tárkány Kovács, "is to transform contemporary improvisative music – that is often called jazz – in a way that it becomes more Hungarian. We will forge rhythmic arrangements, melodic progression, ornamentation, and lyrics into an organic whole."

There's a lot of traditional Hungarian music here, including this track, the title of which translates as "So Much I Love You," sung by Julianna Paár in a way that reminds me more than a little of Márta Sebestyén from the Hungarian folk group Muzsikas. Enjoy your introduction to Tárkány Művek!


Live version of a song that appears on the album Introducing Tárkány Müvek. Check out the Soundcloud link below for more samples. Some of the songs are manic flurries, others (such as "Csak egyszer voltam boldog / Once in my Life I Was Happy") are slow, melodic, and somber. And don't miss "Nyisd ki babám / Open up Baby" -- a Hungarianization of the jazz standard "On the Sunny Side of the Street."


I've only just been introduced to Tárkány Művek, but I feel certain I'll have more than a passing acquaintance with their music, a jazzy take on an already engrossing musical tradition.