Entertaining music is great. Enduring music is better. Music deeply rooted in tradition yet of and for the modern world -- that may be best of all. And that's the heart of Andra Kouyate & Seke Chi's sound on the new album Saro. 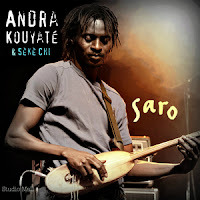 Now, I have nothing against Africans taking up non-traditional instruments; some of my favorite artists lean that direction. It takes a certain vision and talent, however, to entertain modern ears used to guitars and drums without resorting to well-trod musical paths. In a sense, what Kouyate is doing is keeping alive the griot tradition, the telling of relevant stories rather than the mere recitation of the familiar.

And then there's his re-invention of a traditional instrument. Drums and guitars do appear on the album, but not until the fourth track "Lagare," which also welcomes guest artists Amadou & Mariam. To that point and for most of the album, however, the music hinges on the n'goni and calabash, along with a bass line apparently from an instrument Kouyate designed himself, the bass n'goni.

This rhythm section rolls through traditional sounds on many songs, as well as a reggae beat on the title track. And you'll sense a bit of the north African desert in several songs as well.

Hailing from a musical family, Kouyate says “I was born with music, and my life is music. This is what we do in my family. If I don’t make music, I am nothing.” He doesn't look only to the past for inspiration, however. “I am always searching and listening and trying to understand more music. If I only played traditional music in the same way, it would simply be too limiting for me. I want to expand. It’s what I was meant to do.”

Like me, you may not have recognized the name Andra Kouyate...but you may have heard him playing expansively with other groups. With his brother Bassekou, he formed the group N'goni Ba, releasing the album Segu Blue in 2006 and I Speak Fula in 2010. He also played on Habib Koite's Afriki and Oumou Sangare's Saya, among other projects.

Kouyate's music may be the best synthesis of desert and city, traditional and modern that Mali has yet produced. Saro is certainly going to be on my playlists for many weeks to come, as well as a candidate for one of the best albums of 2012.

from the album Saro