No, not the pork kind. I'm talking about the musical kind of chops. I mean, dang. 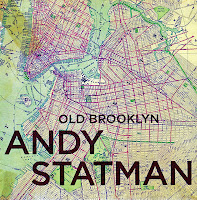 I've known about Andy Statman for some time -- if you're a fan of klezmer music, you can't help but run across him, since he's been playing it since the late 1970s (back when it was necessary to make albums with explanatory titles like Jewish Klezmer Music).

But last week my acquaintance with Statman was rekindled when I ran across this youtube video of his trio (Staman on mandolin, Jim Whitney on bass, and Larry Eagle on drums) doing something truly breathtaking to a traditional Jewish chuppah (wedding canopy) march.

Given his deep klezmer discography and his trio's regular appearances at Derech Amuno Synagogue in Greenwich Village in New York City, it's hard to imagine Statman's upbringing in a secular family. I haven't had the chance to meet and speak with him; I'm sure there's a great story to his headlong dive into this music, and his parallel love of bluegrass music, which also is on display in his discography as far back as the 1980s, as well as on his newest album Old Brooklyn.

This generous double album runs 96 minutes, and manages to intersperse -- and even wed -- klezmer and bluegrass through its 25 tracks. It's jaw-droppingly delicious music that, like Statman himself, doesn't fit neatly into categories. Just check out this upbeat track with its crazy organ solo. It bends the brain, and satisfies the soul.


[mp3] Andy Statman: "Mah Yedidus (How Beloved Is Your Rest)"

from the album Old Brooklyn