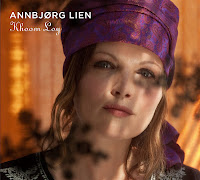 Khoom Loy so gracefully show us your light
Red, green and purple wishes for life.
Elevate, elevate, Khoom Loy elevate
Take all our worries away.


For all I knew when I first listened to Annbjørg Lien's new album Khoom Loy, the title referred to some Norwegian folktale character (the sister of Baba Yaga, perhaps?).

But then, this doesn't sound like an album rooted strictly in local tradition. Lien's fiddling is rooted there, certainly, but the list of guest musicians and instruments suggests a rather broader musical reach: The album includes tabla, bamboo flute, sarod, bouzouki, and buzuq (the last one I had to look up -- it's a long-necked fretted lute similar to the bouzouki and saz). And that's on top of Lien's own band, whose talents include banjo, ram's horn, and Hammond B3.

"Tareq" -- the instrumental piece opening the album -- has the dark drive and intensity of a perilous nighttime car chase. Elsewhere you'll hear Celtic, jazz, rock, and Indian flavors in a fascinating blend, as on the improvisation "Den Største Daarlighed," a piece featuring Nepalese vocalist Suman Sachin.

The song "Til" includes excerpts from poet Jakob Sande, and contributions from the Kristiansand String Quartet.


from the album Khoom Loy

Oh, and "Khoom Loy" -- turns out that's Thai for "paper lanterns." On this her eighth solo album, Lien displays a stunning ability to weave diverse musical threads into a seamless whole, haunting and magical.

Annaborg's Khoom Loy is fantastic when will she and her group tour the USA?

Sadly, no USA tour in the works as far as I know. Her schedule (http://www.annbjorglien.com/schedule.php) shows her touring in Norway this summer and fall. Perhaps 2013?