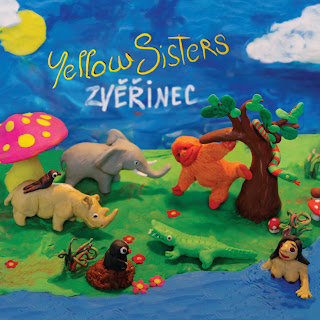 I have a big pile of CDs (and their digital equivalents) awaiting my attentions. Some are from big-name musicians; others I'm interested in for other reasons. But none of them I've sampled so far has lit up my imagination like the new album Zvěřinec from Yellow Sisters.

You could be forgiven for thinking that this Czech-language women's a capella group diving into the realm of children's music might have a rather small niche market. I mean, honestly, what's the birth rate of the Czech Republic, anyway?

As often happens with great music, however, the appeal of Yellow Sisters' music transcends culture and language. The songs are immensely entertaining and fun to listen to, just as much for adults (who like groups such as Zap Mama, Faraualla, Kitka, and Varttina) as for kids.


The title translates as "menagerie" and the singers involved their families in making it -- you'll hear kids' and dads' voices along with the group members. The resulting music is inviting, energetic, and never condescending or insipid. There's the wonderful harmony on "Máme doma strašná zvířata" ("we have terrible pets"), the marimba-laced reggae feel of "Šel jeden krokodýl" (something about a rasta crocodile), and the kid-rap on "Ninja Team," (no translation needed).

Altogether we have eight children and besides the smallest one, who is now two months old, everybody participated in the album. Some of them we had to tickle a little just to make them laugh at he microphone, the older ones started beatboxing and rapping.  We had a great time at the studio watching this. In the end even the dads became part of this. One of them wrote a rhyme for us and sang a lullaby to his son, another one played the cajon....  Sometimes it was quite frantic, such a menagerie. Especially when at one point there were eight children all at once at the studio and we tried to record with them a choir of fighting ninjas.


This song is, I believe, about a bouncy squirrel, and highlights the tight, joyful sound of Yellow Sisters, along with the cutest rappers ever. Enjoy.