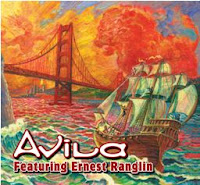 I went to an 80th birthday party last weekend, a fun event with great food, engaging conversation, and a photographer bearing funny props and costumes for the guests to enjoy. It was a great celebration of life, and the birthday boy admitted that he was a little taken aback with all of the attention from more people than he knew cared for him. And I suppose a sense of love and belonging is probably the best birthday gift one can expect, right?

I'm expecting that Ernest Ranglin was similarly feeling the love at his 80th birthday bash in June at the Great American Music Hall in San Francisco. The Jamaican guitar legend wasn't just the birthday boy, he was front and center on stage celebrating the release of his new album Avila. 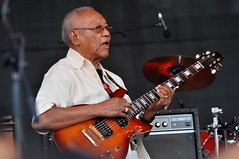 Ranglin could have retired by now. I mean, he's been making music since the 1950s, fer cryin' out loud. But we're grateful he's still working, 'cause this is some delicious stuff. Recorded in just three days, the album's eight tracks highlight Ranglin's subtle guitar brilliance, stroking out delicious melodies with jazz, funk, jamband, and global flavors (the opening track is a cover of South African pianist Abdullah Ibrahim's "Manenberg").

"Ernest has an incredible musical ear and a work ethic and stamina that's amazing," says producer Tony Mindel. "I decided to put together a dream band.... It was a life-changing experience."

For his part, Ranglin praised the younger musicians. "I'm still learning, and everyone I meet has something to teach me."

One thing he's learned is that he works well with this trio; they recently returned to the studio to record another album, which is slated to be released this fall.

The official release date for Avila is Aug. 28; while you wait, enjoy this Yossi Fine-penned track from the CD.

from the album Avila