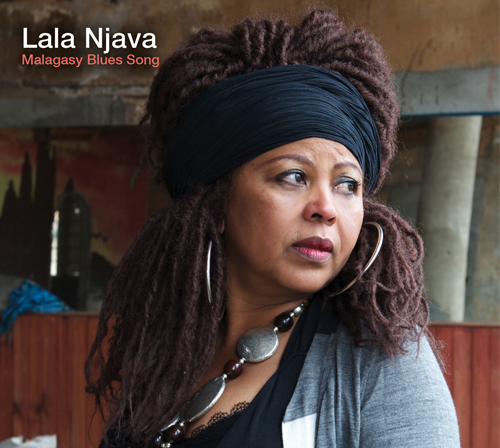 Ever since I was introduced to Malagasy music via an early Rossy album, I've loved the distinctive sounds from this African island. So I was excited about an album called Malagasy Blues Song, though the artist was unfamiliar.

Digging into the music, I found few of the usual Malagasy sounds: sure the album includes valiha-style guitar and contributions by famed Madagascan accordion player Régis Gizavo, but the overall vibe reminds me more of the polished studio sound of Garifuna artist Aurelio Martinez than of other artists from Madagascar (particularly on the track "Voatse").

Don't get me wrong; I'm loving Njava's music. It just wasn't what I expected. Perhaps that's because Njava has made her home in Belgium for many years now and has incorporated more Western sounds into her music. Could that make her a perfect ambassador to bring Malagasy music into wider appreciation? Certainly the rich, evocative tunes will have a broad appeal.

The album opens with "Sao Gnanay," supposedly a nostalgic song about the beauty of Madagascar, though the sparse, brooding guitar and Njava's sharp, reedy voice -- more wary than warm -- may not make it the most appealing tourist soundtrack. "Dinako" moves more into Afropop realms, with Gizavo's accordion providing lyrical counterpoint to the (here somewhat gentler) vocals. "Blues Song" doesn't sound quite like any blues you've heard before, but you'll recognize the spirit. And it's Njava's spirit that propels this album forward, an emotional communication that transcends language (which is great, since no track notes/translations are provided).
As I listened, I kept having a nagging feeling that there was something familiar about the name Njava, and finally I figured it out. Lala initially went to Europe to join her brothers Dozzy, Pata, and Maximin and sister Monika, where they formed a band called Njava. They released two albums, Vetse and Source: I realized I had Vetse in my (somewhat disorganized) library, and found it to stick more closely to typical Malagasy music. Dig up these old albums for a different sound, and for a glimpse into Lala's musical evolution.

Even though Lala is the face of this album, the music is still a family affair, with most of the music written, arranged, and produced by the Njava siblings.